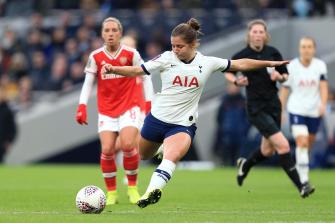 My wife doesn’t watch football.  My son doesn’t really understand football.  So it was something of a surprise when my wife suggested we all go and watch Tottenham Hotspur Women play the formidable Arsenal Women.

The stadium is a short walk from our home, so we got there on time, and found ourselves ascending lots of stairs, and then into the arena, where we were almost as high as the clouds.  My wife didn’t like being so high up, and the seats being so steep.  Still that was soon forgotten as the crowd built up.  Unfortunately, we had a group of four people in front of us who arrived late and kept getting out of their seats and wandering off.  I can’t believe their bladders were that weak.  And there was a guy close by with such a big bird’s nest of hair that it blocked our view of the pitch where lots of action took place.

We’d decided to support Spurs as they were our local team. (You can see the stadium from our bedroom.)  My wife predicted a score of 2-0 to Arsenal, my son predicted 2-0 to Spurs, and I predicted 1-1.  Alas, my wife got it right, and Arsenal were the better team, winning 2-0.

There was a record-breaking attendance of 38,262 at the game and it was good to be a part of it.

It was a great match, and a great day out, and I really hope there are more women’s games (and decent ticket prices) at the stadium.